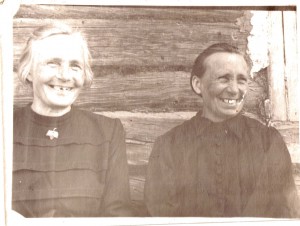 A couple months ago I took my son to visit my Aunt Birutė to talk about family history and my grandmother’s exile. She gave me some extraordinary photographs during that visit, including several from Siberia. More than I expected.

One small photograph, dated 1957, shows my grandmother’s house. Made of logs and with a straw roof, it stands on fenced property. Both look bigger than I would have expected. I’d always imagined the house surrounded by forest, but the land all around her house is flat.

Another shows my grandmother and her sister Magrieta standing in the garden, up to their knees in lush leaves. They wear matching shirts and skirts made from fabric sent in care-packages by faraway daughters. On the back, in Magrieta’s handwriting: “The cabbage garden, beyond it that you can see the potatoes and fence.” I’m struck by how happy my grandmother looks in these photographs: strong and ruddy, she could be an early American pioneer. (In the above photograph my grandmother sits on the left. She has several teeth missing, knocked out in an accident with a combine harvester.)

For the last few weeks, I’ve been singing a new song to my son Sebastian at bedtime. We call it “The Bird Song.” I learned it at summer camp as a child.

Like birds returning home
Lead us too, oh Lord.
From the sad road of exile,
Gather us up.

The song was written by my grandmother’s generation about returning to the place they fled or were forced to leave. Now, as I sing my son to sleep, it is these photographs of my grandmother in her cabbage garden that appear in my mind’s eye.

Home: I wonder if it felt like a homecoming when my grandmother returned to Lithuania after seventeen years. Can there be home without family? Her children were grown and far away; it would be another seven years before she saw her family again, when she emigrated Canada. But is family enough to restore home? Surely this country wasn’t home either: the language and customs remained strange to her until her death.

Did exile rob my grandmother of her home in more fundamental way than mere displacement? By taking her away by force, did her captors kill the very possibility of home?

Most people still die within a few kilometres of where they were born. Not so for my grandmother. Not so for many of us who move often and far either by choice or necessity. So what are the ties that bind the landless far from loved ones?

What is home to the exiled?

4 Replies to “Siberian photographs: on home and exile”