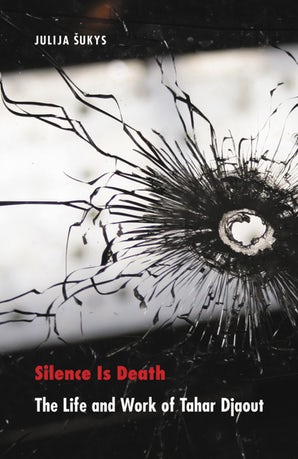 Silence is Death: The Life and Work of Tahar Djaout

“Šukys … has written a beautiful but unsentimental book about her search for Algerian poet Tahar Djaout, who was killed in 1993 at the height of Islamic terrorism against intellectuals. No work of dreary lit crit, this is creative nonfiction at its best. Beginning and ending in the Iowa city of Elkader (which was named after a young Algerian hero), the book reveals Djaout’s extraordinary eloquence on every page. … Highly recommended.” — miriam cooke, Choice Reviews Online

“One gets a sense of the man, the artist, and Ms. Šukys herself. With a lyrical nomadism, she combines her study with detours into memoir and even fiction on themes of bones and memory.” — Nina C. Ayoub, The Chronicle of Higher Education

“Šukys’ text isn’t straightforward literary biography, and much of the book concerns itself with the question of how to present the man, memory, and writings. … The book works best as an example of how we create our own stories in any book we read, how facts don’t necessarily provide more than the fictions we spin around them. …  Šukys has created something that’s of greater interest and appeal than the usual author-monograph.” — The Complete Review

About Silence is Death

On May 26, 1993, the Algerian novelist and poet Tahar Djaout was gunned down in an attack attributed to Islamist extremists. An outspoken critic of the extremism roiling his nation, Djaout, in his death, became a powerful symbol for the “murder of Algerian culture,” as scores of journalists, writers, and scholars were targeted in a swelling wave of violence.

The author of twelve books of fiction and poetry, Djaout was murdered at a critical point in his career, just as his literary voice was maturing. His death was a great loss not only for Algeria and for Francophone literature but also for world literature. Rage at the news of his slaying was explosive but did nothing to quell the increasing bloodshed.

Silence Is Death considers the life and work of Djaout in light of his murder and his role in the conflict that raged between Islamist terrorist cells and Algeria’s military regime in the 1990s. The result is an innovative meditation on death, authorship, and the political role of intellectuals. By collapsing the genres of history, biography, personal memoir, fiction, and cultural analysis, Julija Šukys investigates notions of authorial neutrality as well as the relationship between reader and writer in life and in death. Her work offers a view of reading as an encounter across time and place and opens the possibility of a relationship between different cultures under peaceful terms.