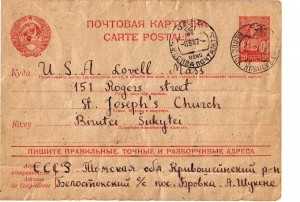 Pictured above is one of my most cherished possessions. It’s a 1947 postcard sent from my grandmother in Siberia, addressed to her husband and children. It was sent to a town in Massachusetts where we had relatives, though at the time my grandfather and his kids (my father among them) were living in the UK. My grandmother wrote their church’s address from memory, I think, and sent it off as a kind of Hail Mary attempt to reach her loved ones.

Amazingly, it made its way out of Stalinist Russia and into the hands of distant cousins in the US. From there, the card found its addressees: my father, my two aunts and grandfather. It was the only moment of communication my grandmother had with her children between 1941 and 1955, when regular correspondence between Siberia and the West became possible.

The back of the postcard reads: 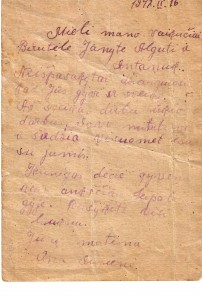 My Dear Children Birutėlė, Janutė, Algutis and Antanukas [the latter, her husband, is addressed as one of her children, because she had told Soviet authorities her husband was dead],

It made me indescribably happy to learn that you were alive and well. I’m healthy, I work on a farm. In my thoughts and in my heart I am always with you.

The priest, my uncle, is still alive and lives in Liepalingis [Lithuania], as before.

Write to me, all. I await your letters.

After weeks of working my way through my travel notes from Siberia, I’m now back to my archives: reading my grandmother’s letters, and travelling in my mind across languages, time, space.

My grandmother wrote letters to her children from Siberia from 1955 to 1958, then from Soviet Lithuania from 1958 to 1965, when she joined her family in Canada. The above card marks the first step in their long process of return to one another. For me, now, it marks the beginning of my next stage of writing.

While working through my Siberian travel notebook over the past few weeks, I wrote a great deal in a very short span of time. It was going so well that I didn’t dare stop, question, or even re-read too much. In fact, I was working so fast that I  became uneasy, and started bracing myself for the other shoe to drop.

Well, crisis averted. With the complex tasks of weaving past with present and of melding my life with that of another back in my sights again, the familiar feeling of wading through mud has returned. Writing hurts again and the book resists.

All is well with the world in this regard.

2 Replies to “Postcard from Siberia”