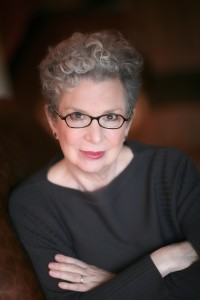 Nancy K. Miller. What They Saved: Pieces of  Jewish Past. University of Nebraska Press, 2011.

In her new memoir, What They Saved: Pieces of a Jewish Past, Nancy K. Miller tells the story of how she reconstructed her family’s missing past from a handful of mysterious objects found in dresser drawers and apartment closets after her father’s death. The strange collection–locks of hair, a postcard from Argentina, a cemetery receipt, letters written in Yiddish—moved her to search for the people who had left these traces of their lives and to understand what had happened to them. As Miller slowly pieced together her family portrait and assembled a genealogical tree, she felt connected in unexpected ways to an immigrant narrative that began in Eastern Europe at the turn of the twentieth century, when her ancestors headed for the Lower East Side of Manhattan. At the end of her decade-long quest, Miller started to imagine the life she might have had with the missing side of her family. Suspended between what had been lost and what she found, Miller finally comes to terms with the bittersweet legacy of the third generation—tantalizing fragments of disappeared worlds.

Nancy K. Miller is Distinguished Professor of English and Comparative Literature at the Graduate Center of the City University of New York. She has written, edited or co-edited more than a dozen volumes, including Bequest and Betrayal: Memoirs of a Parent’s Death, But Enough About Me: Why We Read Other People’s Lives, and several books on feminist criticism and women’s writing. 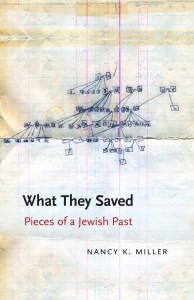 Julija Šukys: I once heard a novelist talk about how she decided to write a book about a house. One by one, she told the story of each room. I very much like the idea of writing biographies of objects or places. Your book, it seems to me, has similar origins; in your case, a private archive of objects passed down in your family, including a collection of letters, a tallis bag containing tefillin, a map of a plot of land in Israel, and a lock of hair enclosed in a soap box. Talk a little about this collection of items, and how your contemplation of them led you to write this book.

Nancy K. Miller: Not long after my father’s death in 1989, as I emptied the family apartment, I found the tefillin and the locks of hair in a drawer. More precisely, I found the tefillin in a set of drawers that resembled a secretary and that was part of the living room furniture, and the box of fancy French soap in which the hair had been preserved in a bedroom dresser. The distinction seems important, if only because following the model of the house, I now in memory recall the objects in their original location. But also perhaps because, now that I think about it, the tefillin were destined to be worn in a public place—a synagogue, or any other place of prayer—and therefore were stored in the living room, whereas the box of hair was stored in the more intimate space of the bedroom. Not that I thought then about what possible difference that made.

At that point in my life, I was about to take off for a year’s sabbatical in France, and there was little time for contemplation. All I could do in the days I had before leaving was to gather these objects—and others, the letters, photographs, and random scraps of paper—and set them aside for storage. I knew I wanted to hold on to these things, but the idea of writing anything inspired by them was very far from my mind. I was working on the book that was to become Getting Personal (1990), and while I suppose I might have contemplated, to use your word, the significance of these objects, I did not. Weirdly, though, it now strikes me, before my father died, I wrote a very short essay about his debilitating illness, a meditation I called “My Father’s Penis,” and that constitutes the last chapter of that book. Even when I wrote the book Bequest and Betrayal (1996), in which I deal with the death of my parents and their legacy, as well as other family matters that I dwell on in What They Saved, I did not turn my attention to what now seems to me a precious collection of memorial objects.

It was only when I received the strange phone call from the realtor in Los Angeles telling me that I had inherited property from my paternal grandparents that I began to realize that this small cache of objects contained, or potentially contained large stores (not yet stories) of information about my father’s side of the family. Since I knew almost nothing of these people—his people—I started to wonder about who they were, what had happened to them, and how their absence, their silence might have affected my childhood. But again, I was not thinking about a book. I related the anecdote about the phone call and the meeting it led to with my father’s nephew (I had known neither my father’s brother, nor his son, except for their names) in an epilogue to But Enough About Me (2002), saying that it was a good story. But the story, such as it was (and wasn’t) kept tugging at my mind, and I continued to research the missing family members. I wrote an academic essay (2007), in which I sketched out whatever I then knew—not much!—and interwove those bits of knowledge with stories of immigration (Mary Antin, Amos Oz) in order to create some perspective for my very slender speculations.

In 2008, after vowing I would never follow the path of the “root-seekers” heading for Eastern Europe, I traveled there myself. And when I returned home, I realized that I had to write this book. It was at that moment that I first understood that the objects not only grounded my story, in some sense they were the story, or at least they provided the clues I needed to construct a narrative.

While reading your book I felt a host of tensions at play in the narrative. You write how as a young woman you rejected your father’s surname, Kipnis, and took on your mother’s name, Miller (retaining only the middle initial K. from your father). Yet, here you are, many years later trying to reconstruct the very past, the otherness, and the patriarchal footprint, I suppose, that you once rejected.

There’s another similar moment: the story of the tefillin — sacred prayer boxes — that you inherited. You consider what to do with the tefillin: “Because the paraphernalia of prayer belongs to men, I could not see the point in saving this legacy, but something about putting the velvet bag in the trash along with the household garbage made me uneasy – would I be throwing away an entire tradition? Part of me said yes, and why not?” (217). In the end, as a kind of compromise, you get rid of the bag and straps, and keep the boxes themselves as a souvenir of your father’s (and your?) abandoned religious past.

It’s a big question, I know, but I wonder if you could talk about this complicated desire both to excavate the past (by tracing family trees and reconstructing histories) and to turn one’s back on it (by discarding pieces of the past like family names, languages, and religious beliefs).

The fact that all the objects were, in one way or the other, connected to Jewish history posed a conundrum. How could I pursue this research when so many of these markers—the pogrom-driven immigration, the property in Palestine, and so on, were parts of my inheritance that I had rejected, or at least distanced myself from? In particular, because of what you nicely call “the patriarchal footprint” (I love that phrase), I had rejected religious observance and, what we used to call “the name of the father.” Above all, in keeping with the seventies feminist ethos I believed in, I dreamed only of self-invention, the second-wave version of the “new woman.”

But by the time I had launched myself into this project of reclaiming the past, I could not quite so neatly sever myself from everything that had shaped it—and me. What surprised me the most and what led me to backtrack on some of my earlier positions was seeing how much closer I was to my grandparents’ immigration than I had realized. I mean that I understood in a wholly new way how much my parents were touched by the fact of their parents (on both sides) being immigrants, and then, by extension, how their manner of inheriting that immigrant past—my father was probably conceived in Russia—had been passed on to me, if only through their silence on the matter. There’s a term from psychoanalysis that one of my students (Molly Pulda) writing about memoir has introduced me to: nescience. Not knowing. The notion is that knowing that there is something you don’t know, in this case in a family setting, can have a powerful effect on one’s psyche. The further I delved into my research, the more I saw that what I saw as far from me—having nothing to do with me—was not outside me, but in me.

This is Part I of a two-part interview. Click here to read Part II.

One Reply to “CNF Conversations: An Interview with Nancy K. Miller (Part I)”