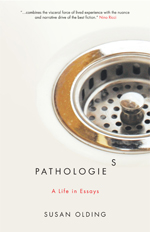 This is Part II of a two-piece interview with author, Susan Olding. Click here to access Part I.

Julija Šukys: You describe leaving Maia for the first time– it’s not an easy thing to do, but necessary and desirable for your work. There, after having received positive feedback regarding an essay you’ve written about Maia, you decide to change course and run with the idea of writing a book about your relationship with her. When you workshop this idea, you find yourself harshly criticized by fellow writers and even a revered memoirist and mentor, who compares your project with her own unsavoury idea of writing a book about a pedophile. I recognized so many of my own anxieties and experiences in this piece. Please talk a little about your view and experience of writing and mothering. How did becoming a mother change your relationship to writing?

Susan Olding: In the short term, it made it a lot harder to get any work done!

But over time, it has been the greatest thing possible for my writing life. First, because our daughter brings enormous joy into our lives, and joy begets joy. Also, at times she’s been a muse. And she has taught me so much about myself and my limits, and also about creativity. She’s profluent and spontaneous in a way I’ve never been, and it’s such deep pleasure to share her in her quicksilver spirit. I’m so grateful to be her mother.

You point to how writing about one’s own life is sometimes seen as unseemly, solipsistic, narcissistic. It can be, but it doesn’t have to. What, in your view, is the piece that sets successful autobiographical writing apart?

Successful autobiographical writing invites readers to draw comparisons to their own experience; it prompts and provides occasion for a kind of deep reflection that may be increasingly rare in our fragmented lives, and reminds us of where we stand in a historical or cultural context. Somehow, it affirms the possibility of making meaning. So it’s all about the author—and yet not about the author, at all! Strange paradox.

How does this work? Subtext, subtext, subtext. Language and structure create this subtext. Which is why Virginia Woolf, in “The Modern Essay,” counsels that it is “no use being charming, virtuous, or even learned and brilliant into the bargain, unless…you…know how to write.”

Adam Gopnick claims that the memoir and personal essay are actually the least self-indulgent of genres. You can’t get away with flourishes or padding if you are writing about yourself.

You have changed some of the names in the book and have retained others, like Maia’s. How do you decide when to do this? Do you allow the people you write about any veto power?

My decisions about retaining or changing names weren’t terribly systematic. I went with my gut.

I asked the people I’m closest to—my husband and my daughter. Of course I knew there was no way to get anything like “informed consent” from an eight year old, but Maia knew generally that I had written about our struggles, and her decision to go by her own name seemed consistent with her character. Right now she is pre-teen shy, and would probably balk, but in general she is a very open person and always has been.

I also asked several friends. Most chose to go under their own names but a few preferred to remain anonymous. I respected their wishes.

I changed students’ names and a few identifying features so they wouldn’t be recognizable and their privacy would be preserved. These people didn’t know I was writing about them; it didn’t seem fair to identify them by name; nor, for that matter, did it seem necessary.

As for my parents, I felt their privacy was already protected to some degree (among strangers) because I don’t share their surname. For extra protection, I changed their first names.

I gave veto power only once, to my brother, for  “On Separation,” the piece about my sister-in-law, and I also asked him if I should change her name. He generously allowed me to publish and encouraged me to retain her name because he felt she would have liked that.

Do you still worry about hurting those you write about?

Of course! Although “worry” probably isn’t the right word. I hope I won’t hurt those I write about. And I do my best to prevent that. But I have in fact hurt people that I’ve written about, and suspect I may do so again. And ultimately, I’m loyal to the work.

I want to touch on the issues of critique and courage. I found the description of your devastation and confusion in the face of you peers’ criticisms very moving. The workshop participants (fellow writers) told you that it would be unfair to write about your daughter, and that you risked ruining her life by doing so. After sometime, you came to the conclusion that, despite their objections, you had to or wanted to write about her anyway. I think that this essay tells some deep truths about the writing process: both about how vulnerable writers are, but also how fierce. Even when we are racked with self-doubt, every writer who manages to bring a big project like a book to fruition also needs to have a rock-hard belief in the value what she does. How has that moment of doubt, after you received such criticism for your plans to write about your daughter, shaped your subsequent work and way of thinking?

Such a good question.

The simple answer is that I have not written the book that I proposed to write at the conference. Because in a way—and this is the hardest thing to acknowledge—that teacher was right! It wasn’t the right time to write a book about Maia.

Not because I might ruin her life. Not because it would say something awful about me as a person if I chose to write it. But because I wasn’t ready. And on some level, I recognized this at the time, and my recognition made my peers’ objections and the teacher’s objections cut more deeply. For the fact is, if I had been ready, nothing they said would have stopped me.

I may never be ready. Strangely, perhaps, that possibility doesn’t bother me. The need to write that particular book has passed. I have sometimes mourned other “lost” books—the novel that I set aside 100 pages in, the book of poems that I didn’t manage to finish. But I don’t mourn the book about Maia.

Having said all that, although I may not have written a whole book, I did write about my daughter. And I published what I wrote. So in that sense, I ignored what my critics said. I also wrote about the conference itself. Did I say writing well was the best defence? It’s also the best revenge. [Insert evil chuckle.]

Seriously, though—I hope there’s enough irony in “Mama’s Voices” to suggest that while my hurt was real, and to some degree justified, I also see humour in the situation. The essay includes a parallel narrative about Lana Turner, queen of the melodrama. I had my own little melodrama going on in that workshop!

But “fierce” is such a great word; we really do have to be fierce. People will tell us that what we’re doing can’t be done, or shouldn’t be done, or that we’re not good at it, or that it isn’t worth doing. And usually, we’re advised to ignore these critical voices. But I don’t believe we can ignore them. Or at least I can’t ignore them, so I’ve made necessity a virtue.

I say we need to learn to listen, for blanket criticisms can disguise meaningful objections, and we need to cultivate enough humility to recognize when that’s the case. At the same time, we need to hang on to some sense of the worth of what we’re doing. And we need to trust our own inner vision, and constantly measure our work against our felt sense of the beautiful and the true.

“My own criticism has given me pain without comparison beyond what Blackwood or the Quarterly could possibly inflict,” said Keats— “and also, when I feel I am right, no external praise can give me such a glow as my own solitary reperception and ratification of what is fine.”

But it’s an incredibly delicate balance—to remain open to critique while at the same time holding fast to the essential value of what we are doing. The test I sometimes use: Would I want to read this? If not, then I shouldn’t foist it on others. If yes, then I need to keep working on it until I get it right.

Last question: your form is the essay. Conventional wisdom in the writing/publishing community says that essays don’t sell and that the form is unsexy. Tell me about how you came to be an essayist, and what you think the form has to offer.

Conventional wisdom is right; essays don’t sell! At least they don’t sell when the author is an unknown writer. I was thrilled when Melanie Little at Freehand took a chance on this collection.

But why don’t essays sell? It’s a mystery. Maybe it’s even a lie. Because they do sell, in anthologies. Look at how well the Dropped Threads series (and others) have done. Most of the pieces in those anthologies are essays of one kind or another, although typically they are less deeply exploratory than the best writing in the genre. Still, readers love them.  And readers also continue to respond to classic essays by Virginia Woolf, George Orwell, and many more. So the form is very much alive, even if writers can’t make a living from it.

Is the essay my form? Actually, I write fiction and poetry, too. It’s just that, in general, I’ve been less satisfied with my work in those genres and haven’t published as much of it (see above). But you’re onto something, because I think I’m an essayist by temperament and inclination. A born questioner and self-questioner.

It’s arguable, but the essay may be our most intimate form. Reading one is a bit like reading a letter from a friend, and in fact, some people believe that Montaigne began writing his essays because he could no longer converse with a dear friend who had succumbed to the plague. Essays can be playful or deeply serious (or both at once); they can be concise or expansive; they can be lyrical or logical. Always, they invite the reader to share in an exploration of some kind. You never know where you’ll end up when you set out, or what you’ll see, but you do know that the author will show and tell, and you will think and feel, that no part of you will be left behind or set aside.

I love the form. I loved it long before I knew its name. That may not sound sexy to publishers, but it sure sounds sexy to me!