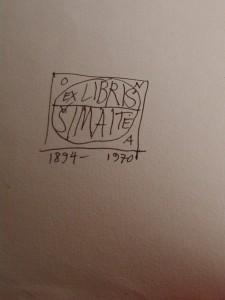 True story: A researcher at the archives at Kent State University stumbles on the transcript of an interview with her grandmother. This is what happened to me in 2001, when I made the trip from Chicago to Kent, Ohio to look at two boxes of uncatalogued Šimaitė papers. Inside one of the cartons was a black notebook labelled “Father Juozas Vailokaitis (1880-1953) in Siberia.” A note fixed to its cover read: “This Lithuanian material was found on a shelf in the Archive, unidentified, on January 2, 1994. It has been placed with these other materials in hope that the next researcher can identify it for us.” I almost fell out of my chair when I saw what was inside. It was a seventy-two-page interview with my grandmother.

I saw Krzysztof Kieslowski’s film The Double Life of Véronique when I was a teenager, and I remember loving it, but not understanding it. What was the connection between the two women who shared a name? How did their mirrored lives interact? Why did one live and the other die? These were questions I couldn’t answer.

Recently, this film has come back to mind with each new mirroring I find in the lives of my two Onas, who shared not only a first name, but second initial. Ona Šimaitė and my grandmother, Ona Šukienė, were born in Lithuanian villages within five years of one another. For both, 1941 was a pivotal year that changed their lives forever: this was the year the Nazis invaded Vilnius, and the year the Red Army deported my grandmother to Siberia. Fragments of both life stories ended up in one box in an American archive to which neither had any connection.

But when I visited my aunt a few weeks ago to talk about family history, I discovered yet another shared biographical detail: both Onas had unofficially adopted daughters named Tanya. Šimaitė’s Tanya was a young Warsaw woman whom she smuggled out of the ghetto; my grandmother’s, a Russian girl in Brovka who reminded her of her own daughters.

I’m not yet sure what to do with this constant doubling. What does it tell us about life? Are we to understand, perhaps, that there are only handful of “starter lives” handed out every generation, and then each individual must do what s/he can with a given template? Have I stumbled upon two variations on the theme of  “the Ona Š. life”? Does this mean that I am living “the Julija Š. life,” and that, if I leave enough behind, someone will find my double in an archive after I’m gone?

I’ve written about the find at Kent State in more detail in an article called “Brovka: Reconstructing a Life in Tatters (My Grandmother’s Journey).” You can read it via this link. (No subscription required)