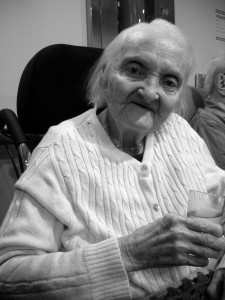 Today, my essay about my maternal grandmother appeared in the Globe and Mail newspaper. It’s a text I started a few months ago, while she was still alive.

For years, even decades, my grandmother barely aged. My mother and I marvelled at how well she was doing, and celebrated each birthday as a gift.

But after age 95 or so, she seemed to grow old at an accelerated pace.

A few months ago, it became clear that she was starting her exit. Her body was tired, and we knew death was not far off.

That’s when I started writing about her.

Originally, the essay was supposed about a kind of anticipation of mourning or grieving in advance. But with her death, it became an elegy. The Globe piece is a slightly shorter, tighter version of a text called “Blessings from Venus” that I read at her funeral.

You can read the essay here.