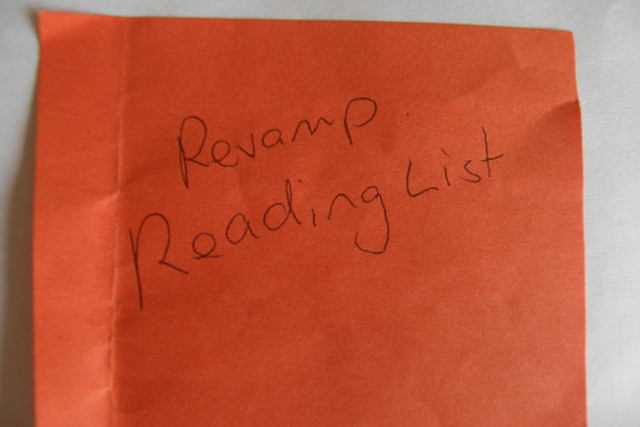 The student in me still wants to know what she’s missed and what she should be reading next, whereas the teacher in me is always looking for resources to use and pass on to her students.

So, when Silas Hansen casually posted this great CNF reading list on Facebook, I asked if I could share it. He points out that it’s not an exhaustive list, nor does he love every book on it. For my part, I often tell my students that reading books that you don’t love can be really good for you too: authors and books with whom I have a combative relationship often stay with me longer than the ones I eat up like candy.

All this is to say that the list is a start. I predict you’ll find something of interest on it. Happy reading, and thank you, Silas. You can learn more about Silas Hansen here.

Notes from No Man’s Land by Eula Biss

Waist-High in the World by Nancy Mairs

Neck Deep and Other Predicaments by Ander Monson

Take the Cannoli by Sarah Vowell

Half Empty by David Rakoff

Portrait of My Body by Phillip Lopate

Such a Life by Lee Martin

Notes of a Native Son by James Baldwin

The Empathy Exams by Leslie Jamison

The Boys of My Youth by Jo Ann Beard

Men Explain Things to Me by Rebecca Solnit

Neither Here Nor There: Travels in Europe by Bill Bryson

My Misspent Youth by Meghan Daum

From Our House by Lee Martin

Between Panic and Desire by Dinty W. Moore

Men We Reaped by Jesmyn Ward

Planet of the Blind by Stephen Kuusisto

The Last Street Before Cleveland by Joe Mackall

The Year of Magical Thinking by Joan Didion

Hitless Wonder: My Life in Minor League Rock and Roll by Joe Oestreich

Carrier: Untangling the Danger in My DNA by Bonnie J. Rough

Talk Thai: The Adventures of Buddhist Boy by Ira Sukrungruang

One Hundred Demons by Lynda Barry

Another Bullshit Night in Suck City by Nick Flynn

The Truth Book by Joy Castro

Butterfly Boy: Memories of a Chicano Mariposa by Rigoberto Gonzalez

I’m Sorry You Feel That Way by Diana Joseph

The Color of Water by James McBride

The Pat Boone Fan Club: My Life as a White, Anglo-Saxon Jew by Sue William Silverman

This Boy’s Life by Tobias Wolff

Full Body Burden: Growing Up in the Shadow of Rocky Flatts by Kristen Iversen

Friday Night Lights: A Town, a Team, and a Dream by H.G. Bissinger

Slouching Toward Bethlehem by Joan Didion

The White Album by Joan Didion

Thirteen Loops: Race, Violence, and the Last Lynching in America by B.J. Hollars

The Immortal Life of Henrietta Lacks by Rebecca Skloot

Stiff: The Curious Life of Human Cadavers by Mary Roach

The Spirit Catches You and You Fall Down by Anne Fadiman

The Orchid Thief by Susan Orlean

In Cold Blood by Truman Capote

Killer Stuff and Tons of Money by Maureen Stanton