My work is starting to come back to me now, and it’s time for a sort of reckoning. Specifically, it’s time to take editorial suggestions into account and to do some rewriting.

Even though I’ve been through the editorial process many, many times, this moment can still be tricky, emotionally speaking.

You work on a text until you think it’s perfect; you send it out. One day it returns, and there are parts of it flagged as needing improvement. Some of it, your editor tells you, is just not in the right order, and requires major structural work. It may seem as though the thing has been ripped to shreds. Your baby and your ego are bruised and battered.

Often, a writer’s first instinct to get angry and defensive.

When you receive an edit that elicits a fiery emotional response, the best thing to do is to put it away for a while. Write your editor a friendly note thanking her for her attention and work, and tell her that you need some time to sit with her suggestions.

Put the text in a drawer, and don’t go back to it until you’re ready to work through it rationally. Chances are, most edits will seem far less invasive on second reading. Many will flag obvious flaws or errors, and you’ll wonder how you didn’t see them in the first place. This is normal (at least for me). You’ll also see suggestions that you won’t ultimately accept, and that’s OK too, as long as you’re not knee-jerk about it.

﻿As for me, I’m currently trying to practice what I preach. Recently I received a copy edit of my book and, to my dismay, discovered that my editor didn’t understand a key point in the text. I could choose to believe that this means she’s a bad reader and possibly not very smart. Or, I could take this as a sign that there’s something in my text that needs fixing. I’m going with the latter interpretation: chances are, if my editor has misunderstood, she won’t be the only one. A minor change at the beginning of the chapter in question should remedy that.

Second, I just got an essay back that I had sent off with a sort of elation. Occasionally it happens that I write something and think: Yeah, this is so good! It’s perfect as it is. Except almost inevitably it’s not, as the editorial notes to my essay have revealed. The piece needs restructuring and rewriting.

A very small piece of me is sad and slightly humiliated, but the much bigger, much more experienced me knows that this is part of the process, and that this is the only way my essay will get as good as I thought it already was.

So what did I do with those notes? I wrote the editors a friendly email thanking them for their suggestions, and let them know that I would have to sit with them for a while. I’ve put them in a drawer for now, and will return to them next week.

Be brave, be bold, but be humble too.

We’re all still learning. And (I suspect) always will be. My second book is now a virtual reality at the University of Nebraska Press (never mind that it doesn’t even have a cover image yet! Ha!). I’m expecting the copy edit in a matter of weeks, then proofs, then voilà!

If you’re the kind of person who likes to have all her ducks in a row, click here to be among the first to own Epistolophilia: Writing the Life of Ona Šimaitė. 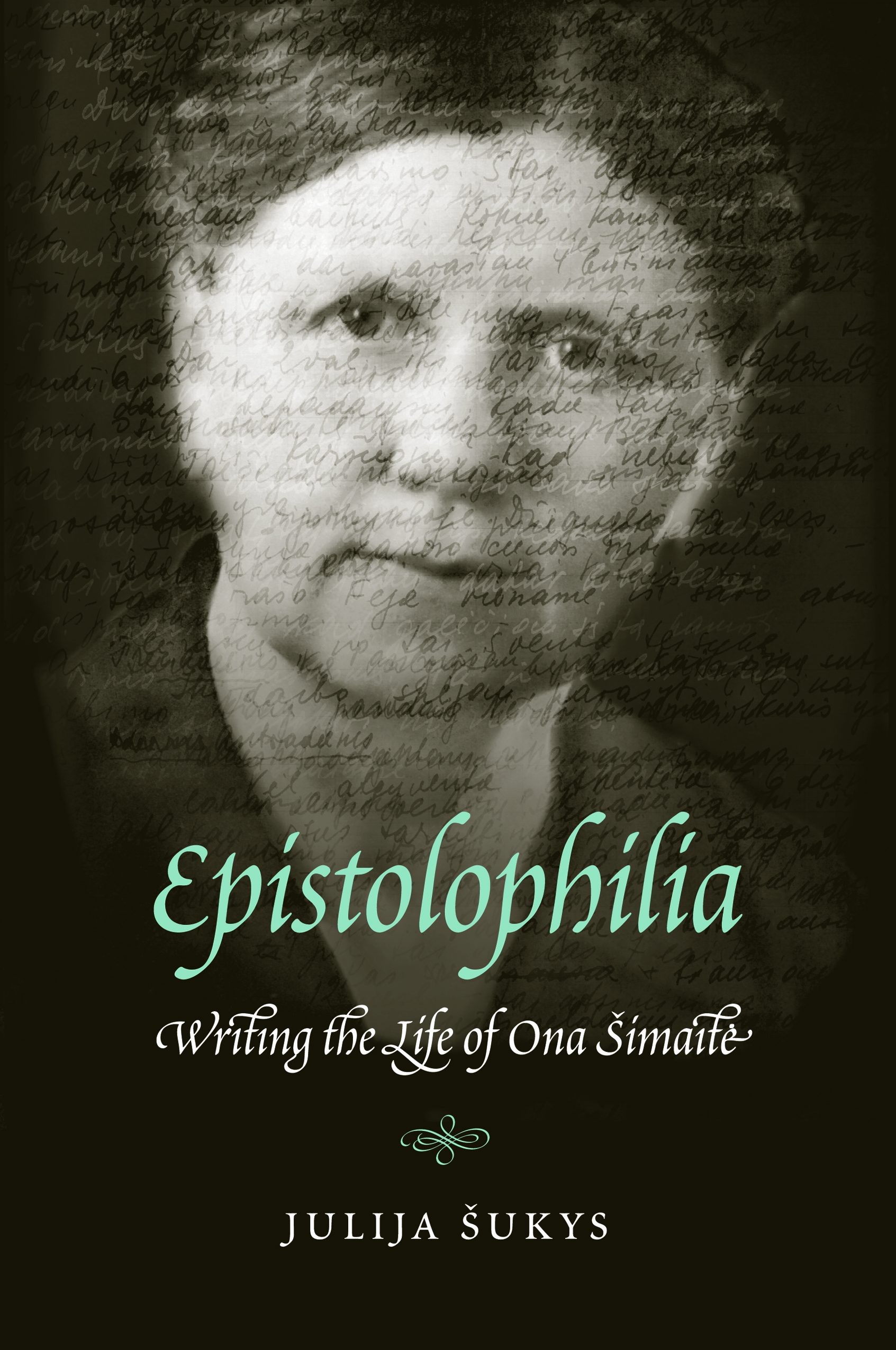 Today I received the last photograph for my forthcoming book, Epistolophilia.

It shows the translator, Vytautas Kauneckas, at the desk in his Lithuanian summer home. Behind him stands a stack of texts sent to him from France by Ona Šimaitė, the subject of my book.

The photograph is from 1959 and has a few water stains. Yet somehow, despite the fact that his image was captured more than fifty years ago in the USSR, the man in the photograph looks utterly contemporary. When I opened the email attachment my colleague at the Vilnius University archives sent me, I found myself deeply moved.

Since I’ve been reading Kauneckas’s letters for the past decade, he (like Šimaitė) is someone I feel I know. Of course, since he died long before I began this project, I never met him. Our posthumous acquaintance only goes one way, but the eyes in that photo tell me I would have liked him not only on paper, but in person too.

In all, my book will contain twenty-seven photographs and two maps. There are lots of images of the book’s subject, the Holocaust rescuer and librarian, Ona Šimaitė, portraits of her correspondents (like Kauneckas), images of her letters and details from her diaries, as well as the shots of significant landmarks I took in the course of my research: her apartments in Paris and Vilnius, and the camps where she was interned.

The process of finding the archival photographs and obtaining permission to publish them has been complex. It’s required a lot of good will and patience on the part of archivists, who (lucky for me) tend to be kind and generous people. I have to say that it’s been worth the trouble, and I can’t wait to see all the visual materials in print.

I wish I could post the Kauneckas photo here, but I must respect the usage agreement I’ve made with the archive — which doesn’t include posting the image on a blog!

I hope that once they appear in Epistolophilia, these photographs will seduce my readers as much as they have me. And that you too will come to love these marginal, ghostly and paper friends as much as I have. Love of letters and letter writing; affection for the art of epistolography; a sickness characterized by excessive letter writing.

After much brainstorming, discussion, reading and re-reading of my manuscript, I have arrived at a title for my second book, due out in 2012 with the University of Nebraska Press:

I’m happy with the title, because it actually says what the book is about: a love of letters, the writing of (oh so) many letters, and the challenge of writing a life on their basis.

I’m busy with final details in the manuscript, but it will be off my desk today. Hurray!

As my dissertation supervisor used to say: Onward. It’s grant season, so I’m writing my yearly emails asking friends and mentors to act as references in various competitions. I’ve been particularly overwhelmed by the encouragement and unqualified support I’ve received on all fronts, even from writer-friends I’ve never met in person and only know through email. All this literary love, as it were, has gotten me thinking about friendship.

It’s a lot easier to put your head down and keep working when you know you have supporters behind you.

One of my first real literary friends (not counting my husband and my friend, Mark, who reads all my manuscripts) came into my life about two years ago when I published a short piece from my now forthcoming book, Epistolophilia.

It was a bad time. My writing was stalled and I had begun to despair at whether I would ever finish the monster that had already eaten up some six years of my life but whose end was not at all in sight. Then one day an email arrived from another writer, a Toronto novelist, saying that my piece was the most exciting thing he’d read in a particular journal for years.

This note from a perfect stranger who had taken the time to track me down for no other reason than to extend himself in friendship gave me a boost that may just be responsible for my having finished my manuscript.

Literary friendships can be harder to come by than you would think. Writers are loners and they are competitive. We suffer from schadenfreude and pettiness, but our worst vice is, without a doubt, envy. And envy coupled with self-doubt is a very bad combination indeed.

It’s been over a year since I consciously started to try and follow that Toronto novelist’s example, and to extend myself to other writers. To do so, I had to work on conquering my jealousies.

I decided that when another author got an agent, I would be happy for her. When a writer I knew signed a contract, won an award or got a grant, I would celebrate his accomplishment. I would take the success of others to mean that I too could succeed.

I don’t know if it’s the new outlook, or if my work has actually gotten that much better, but there’s a lot more literary love in my life since I made the change.

So, to my writerly friends: thank you.

Because of you, I am less alone at my desk.