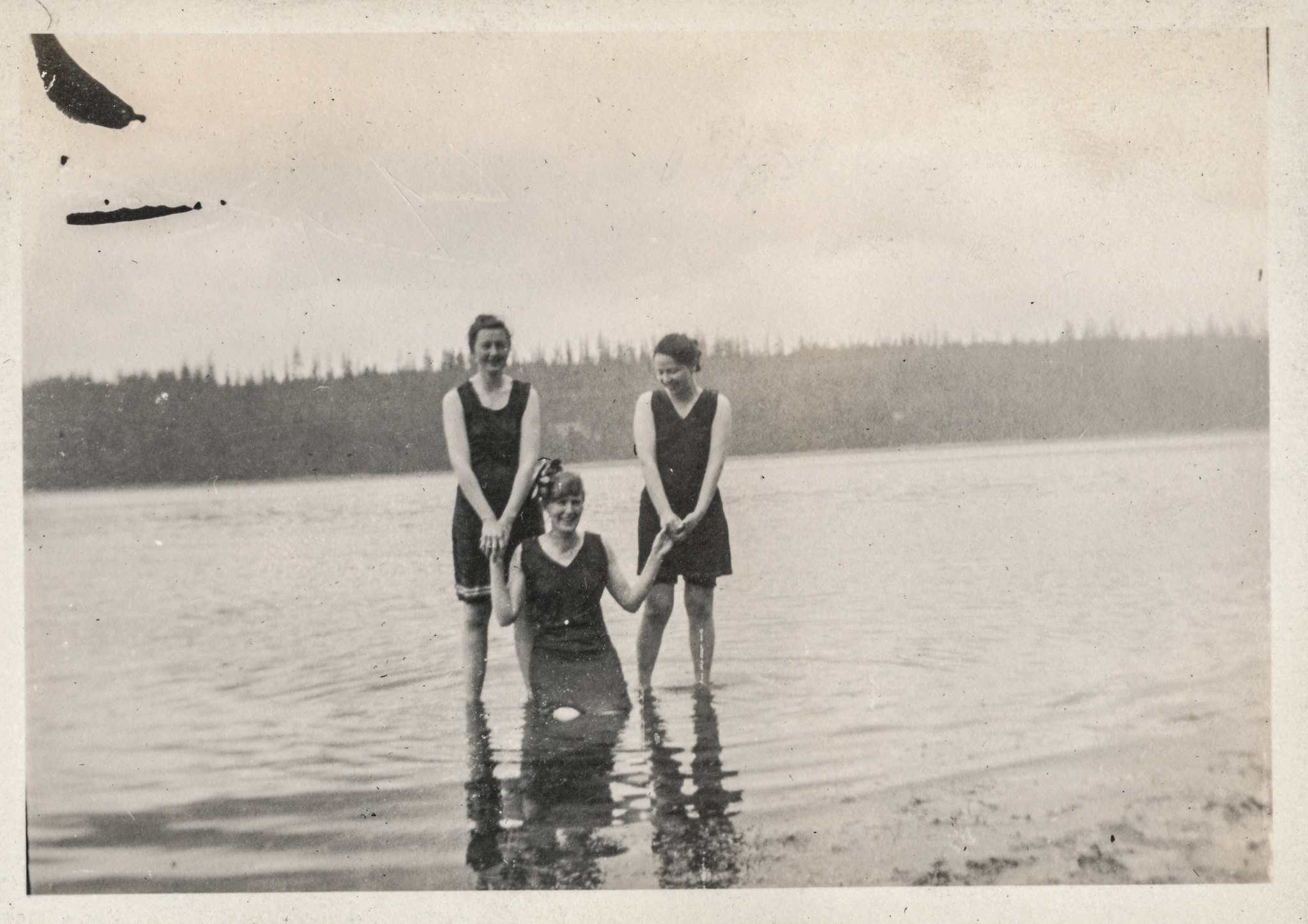 I think I was around 6 when I learned that my aunt Birutė didn’t know how to swim. My father Algirdas (her brother) told me this on the drive from our house to hers one Sunday.

I had been swimming since before I could remember. Swimming, to me, was like breathing. It seemed impossible not to know how to do it.

“Ask her yourself,” my father said with a shrug.

I burst through the door of her house at 66 Aberdeen Road and posed my question before even saying hello. Birutė laughed and confirmed that, yes, it was true, she didn’t know how to swim. Between the war and the DP camps,  she’d simply never had the chance to learn.

The story stayed with me into adulthood. Before that day, Birutė had simply been my aunt with the beehive hairdo, immaculate house, and tidy garden – a woman without a history. But after that day, I became curious. I wanted to understand who she was. I wanted to know what kind of path had led to a life without swimming.

Swimming or no swimming, Birutė was a woman of great style and dignity. She was exacting and demanding of herself and those around her. To a child, she was even a bit scary. But as I grew, I began to see more and more evidence of a different Birutė – a devoted, loving, complicated, wounded, and generous one. I noticed how she forged strong bonds and maintained them. In particular, her late-in-life friendship with a woman named Habiba delighted me. Over the past few years, I heard stories about Habiba’s trips home to Africa, her family there, her delicious cooking, and her beauty. I know I’m not alone in my gratitude and appreciation for Habiba’s care and affection.

Birutė was the last living connection to our grandparents (for some of us, our great-grandparents, and even great-great grandparents) and to their story of tragedy and survival. She was our repository of memory and family history. She was my connection to the past and to people I wish I’d known better or lost too early. Her death has left me with a sort of ache, as if something (a limb, perhaps?) has been cut away. I will miss her always. Now that she’s gone, I will try to remember as she did, so that, when I’m old, our children and grandchildren can hear the stories of their ancestors. In the cupboard beside my oven, I keep two time-worn notebooks full of recipes gathered from friends, learned from my mother, or photocopied from borrowed or discarded books. I used to feel sheepish about these notebooks and rarely admitted to keeping them. They felt overly domestic: too reminiscent of the suburban housewife I never wanted to be mistaken for.

But now that I’ve kept them for over 20 years, and now that I’ve almost run out of pages in the second book, and now that we’re living in plague times, I’ve come to see them differently. The books tell the history of our life as a family. Of the everyday that revolves around the kitchen, the cycles of seasons, sustenance, and celebrations.

I’ve come to see the notebooks as memory.

Like many of you out there, I’m baking more than ever these days: bread, cake, cupcakes, pizza . . . you name it, I’m making it. Armed with my apron, I stare death down. I beat it back and coax yeast and flour to life instead. By feeding the people I love and by keeping them alive, I keep the plague at bay. At least, that’s my hope.

Maybe baking is keeping you and yours alive too.

Dear Reader, if you’re out there: take this recipe as a gift. It’s a simple, sensible (i.e., the best kind of) recipe passed on to me by my Aunt Ruth more than a quarter-century ago. Not a blood relative, but family nonetheless, beloved Aunt Ruth died eight years ago. This was not her most significant legacy and I suspect that she may have been surprised that I bake and remember her by this unassuming loaf, but life’s in the small things. That’s where love resides.

If you bake Aunt Ruth’s Banana bread and like it, please remember her and toast her with a cup of tea. Ruth was whip-smart, funny, and used to call her daughter (my dear friend Anna) “Bananes.” She had beautiful curly black hair and loved her husband with a tenderness and devotion that most can only aspire to. She was also a great cook.

[Photo: The Notebooks, by Julija Šukys]