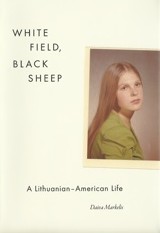 Her parents never really explained what a D.P. was. Years later Daiva Markelis learned that “displaced person” was the designation bestowed upon European refugees like her mom and dad who fled communist Lithuania after the war. Growing up in the Chicago suburb of Cicero, though, Markelis had only heard the name T.P., since her folks pronounced the D as a T: “In first grade we had learned about the Plains Indians, who had lived in tent-like dwellings made of wood and buffalo skin called teepees. In my childish confusion, I thought that perhaps my parents weren’t Lithuanian at all, but Cherokee. I went around telling people that I was the child of teepees.” So begins this touching and affectionate memoir about growing up as a daughter of Lithuanian immigrants.

Markelis was raised during the 1960s and 1970s in a household where Lithuanian was the first language and where Lithuanian holidays were celebrated in traditional dress. White Field, Black Sheep derives much of its charm from this collision of old world and new: a tough but cultured generation that can’t quite understand the ways of America and a younger one weaned on Barbie dolls and The Brady Bunch, Hostess cupcakes and comic books, The Monkees and Captain Kangaroo. Throughout, Markelis recalls the amusing contortions of language and identity that underscored her childhood. She also humorously recollects the touchstones of her youth, from her First Communion to her first game of Twister. Ultimately, she revisits the troubles that surfaced in the wake of her assimilation into American culture: the constricting expectations of her family and community, her problems with alcoholism and depression, and her sometimes contentious but always loving relationship with her mother.

Deftly recreating the emotional world of adolescence, but overlaying it with the hard-won understanding of adulthood, White Field, Black Sheep is a poignant and moving memoir—a lively tale of this Lithuanian-American life.

Daiva Markelis is professor of English at Eastern Illinois University. Her writings have appeared before in the Chicago Tribune Magazine, Chicago Reader, and American Literary Review, among others.

Julija Šukys: Talk a little about how the writing this book. I, for one, heard you read a piece of it at a conference several years ago. How long did it take to write? What was your process? Did you write in fits and starts? Do you rewrite? How much input from others do you take in along the way?

Daiva Markelis: Seven years ago my mother died. Although she was almost eighty-five and had lived a long and interesting life, I mourned her loss deeply. I’d been writing essays and stories for years about growing up Lithuanian-American in Cicero, Illinois. I decided to take the material and add sections about my mother’s life and the year before her death.  The process was quite therapeutic.

I wouldn’t say I write in fits and starts, but I do rearrange material quite a bit. Since I’m not very good at straight narrative, I like to organize sections in a mosaic-like way until a broader picture emerges.  I rewrite a lot. I belong to a writing group of several university women who write fiction, memoir, and poetry.  The group was instrumental in giving feedback as to what worked and what didn’t, especially in terms of structure. White Field would have been a very different book without their suggestions.

Your parents, both now deceased, are central to this memoir. How did their passing help or hinder the writing? Many writers wait until loved ones are gone to write about them (for fear of hurting the living, I suppose). Was this a factor in your case?

Good question. My mother was a big supporter of my writing—the book is dedicated to her memory. I suppose I still would have written the book if she had lived longer since she was a very open-minded woman with a good sense of humour. She would have enjoyed the book, I think, and would have been helpful in suggesting additions and revisions. My father was a writer himself; he wrote short stories and essays in Lithuanian, sometimes about quite sensitive topics.  He was a complicated, interesting man who would have understood the importance of writing honestly and bravely, but I don’t know if he would have necessarily liked to read some of the things I wrote about him.

Another central figure in your book is the ‘character’ of Arvid Žygas (who later becomes Father Arvid Žygas, and eventually grows to be an influential figure in the Lithuanian community). Your descriptions of him are funny and poignant: this oddball, mischievous adolescent develops into a warm and caring adult, who remained one of your dearest friends. Recently, we all learned of his sudden death. This happened before I read your book, so as I read, I couldn’t help thinking how you had managed, without realizing, to build him a monument. And, in a way, it’s a more beautiful monument than perhaps you could make now, because it was built out of love and laughter rather than sorrow. Can you talk a bit about the death of your friend and if your book has taken on a new significance for you in light of his passing?

Arvid was a very good friend and an amazing person. The last time I talked to him was in August of 2010. It was a two-hour conversation—you couldn’t have just a chat with Arvid. He told me he was very worried about his health. Doctors had detected a brain tumor and were going to remove it. But even in the midst of this depressing talk, Arvid found a way to be both humorous and thought-provoking. He was afraid that doctors would take out the section of the brain that regulated empathy, and that he would become some kind of a moral monster. He called back a week later to say that he was going to be okay. Then I heard from friends in January that he was very sick and didn’t want people calling or contacting him. During that conversation in August he’d mentioned that he didn’t want to worry people or take up their time. I was greatly saddened and surprised by his death. I’m trying to write about it, but, you’re right, it’s a different experience, much harder and, of course, not really pleasurable. I’m glad I had the chance to write about the Arvid I knew as a girl and young woman without the spectre of his death hanging over me. END_OF_DOCUMENT_TOKEN_TO_BE_REPLACED One of my first Life-blood posts was a short review of Louise DeSalvo’s essay, “A Portrait of the Puttana as a Middle-Aged Woolf Scholar.” I came across that piece in my search for some frank and honest discussion by women about mothering and writing. My son was still very little (around two), and I was struggling to balance my writing life with the demands of raising a toddler.  I wanted to know what older, wiser mother-writers had to say about the matter. DeSalvo’s essay is one of the best things I’ve read on the subject.

Since, then, I’ve learned more and more about Louise DeSalvo. In her long career, she’s transformed herself from a Virginia Woolf scholar to renowned memoirist. Her books include Vertigo, Breathless, Adultery, Crazy in the Kitchen, and Writing as a Way of Healing. She has long taught writing (specifically the craft of memoir) at Hunter College in New York.

This is all to say that DeSalvo keeps one of the best blogs I’ve seen on writing as craft, process, and a way of life. Her most recent post, dated May 3, 2011, examines the mechanics of memoir. In it, she recounts a conversation with a person she “does her best to avoid” who scoffs at the idea that memoir too has a form that successful writers must take account of. In response to this individual’s challenge (and scorn), she comes up with a list of twenty criteria of a completed (successful) memoir. Here’s a taste, taken from her list of 20:

1.  A good memoir tells a good story; it deals with the issue of cause and effect in life either overtly or covertly; when things make no sense, that is grappled with as well.

2.  A good memoir “puts you there”; it is vivid, and specific.  It is cinematic, in some sense – the reader can “see” what’s happening.

3.  A good memoir shows an awareness of time – the time during which the experience takes place; the effect of the passage of time; how time helps us see things in new ways.  There is emphasis on both personal history, and on the historical context in which these events take place.  The memoir keeps the reader abreast of when the events are occurring. Louise DeSalvo, “A Portrait of the Puttana as a Middle-Aged Woolf Scholar.” Between Women: Biographers, Novelists, Critics, Teachers and Artists Write About Their Work on Women (Routledge, 1993), 35-53.

I love this essay for many reasons.

1) It’s a seriously learned text written in a light and readable first-person voice.

3) It’s about the pleasure of archival work and falling in love with a woman writer who lived long ago.

4) It’s about growing up in an immigrant family and making your way intellectually in the language (and culture) of the new land in a new way.

I came to Virginia Woolf embarrassingly late in my life. By the time I discovered her, or rather by the time I re-read her in a frame of mind that allowed me to be deeply moved, I was in my thirties and had a small child.

Louise DeSalvo describes a similar experience. Her essay starts: “I am thirty-two years old, married, the mother of two small children [. . .].”  Travelling to England on research with a friend, and without her family, she and her companion represent “[t]he next generation of Woolf scholars, in incubation. We are formidable” (35).

The essay explores the role of women among DeSalvo’s Italian parents and their peers, and their relationship to food and men. Both, she warns, tell you a lot about what was expected of her and the many ways in which she was a disappointment.

First: women who care about their families, she says, make fresh pasta every day — a process that takes hours, and ends up enslaving the person saddled with the task.

Second: women who do anything without their husbands are puttana — hence the essay’s title, and the opening scene on the plane.

Instead of a dutiful, stable, ever-cooking mother, DeSalsvo becomes a “whore,” a woman who lives her own life alongside her husband and children. A woman who does things without her man.

She narrates her own experience of the dichotomy of woman-writer (or woman-creator) that Woolf wrote about in her essay A Room of One’s Own, and the hope this text continues to offer to the despairing and frustrated among us.

She tells about loving a child and a husband, and at the same, loving reading, writing and writers.

Ultimately, this is an essay about how literature can change us in fundamental ways. For many of us, writing is no hobby or even profession. It is our vocation, our life-blood, the very thing that keeps us alive.

“Woolf taught us that writers are human beings, that writing is a human act, that the act of writing is filled with human consequences for a society and for its readers. No ‘art for art’s sake.’ Instead, ‘art for the sake of life'” (52).