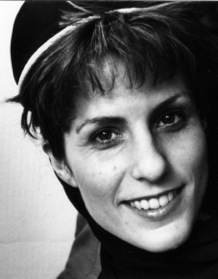 Kim Dana Kupperman is the author of the award-winning I Just Lately Started Buying Wings. Missives from the Other Side of Silence (2010) and the lead editor of You. An Anthology of Essays Devoted to the Second Person (2013). She is the founding editor of Welcome Table Press, an independent nonprofit devoted to publishing and celebrating the essay, and the editor of the press’s periodical pamphlet series Occasional Papers on Practice & Form. She has received many awards and honors, including fellowships from the Pennsylvania Council on the Arts, the Virginia Center for Creative Arts, and the New York Center for Book Arts. Her work has been anthologized in Best American Essays; Blurring the Boundaries. Explorations to the Fringes of Nonfiction; and An Ethical Compass. Coming of Age in the 21st Century and appears regularly in literary periodicals. She teaches in Fairfield University’s low-residency MFA Program in Creative Writing.

About You: Up close and personal, this first-of-its-kind collection showcases contemporary essays that explore failure, planetary movement, and love, among a variety of topics. The candor of these autobiographical, lyric, personal, and segmented narratives is tempered by the distance, intimacy, humor, and unsentimental tenderness that the second person point of view affords both writer and reader. 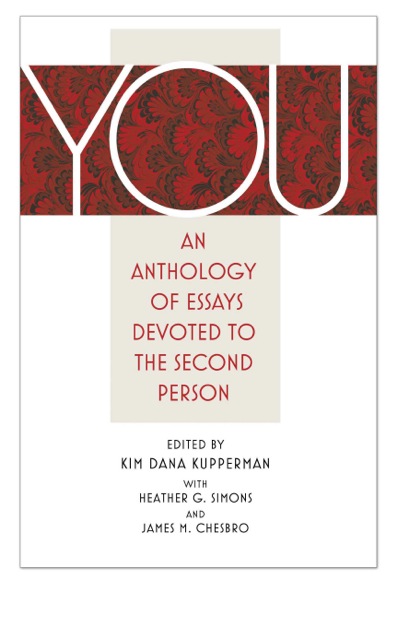 That’s a really helpful distinction: point of view vs. voice. I like the precision of the former.

Tell me what drew you to the idea of pulling together this anthology of essays devoted to the second person. Were most of these pieces commissioned for this collection, or did you draw from the world of literary journals?

As a reader, I’ve been very interested in the second-person point of view, from its obvious and historic epistolary use, to the briefer asides to the reader in prose (nonfiction and fiction), to longer works such as the stories in Lorrie Moore’s Self Help and Junot Diaz’s This Is How You Lose Her, to Stewart O’Nan’s novel A Prayer for the Dying, to name three examples. There was no anthology—at least not one in print that I knew of—that collected essays devoted to the second person, written by contemporary writers. In fact, I’m not sure there are any anthologies that have collected such essays by writers in any century. As an editor and publisher, I sought to fill that gap; most of the pieces were solicited in a call for submissions as well as direct requests to writers and editors whose work the three of us—Heather Simons, James Chesbro, and myself—admired.

I was interested to find that in many of these pieces, the “you” appears to stand in for the “I.” By this I mean that the “you” is really (and often quite clearly) the narrator. I’d say this is the case with pieces by Natashia Déon, Susan Grier, Brenda Miller, and others. What is to be gained by switching from “I” to “you”? How does the second-person point of view change the way that we read these otherwise first-person narratives? Or am I being too simplistic and mischaracterizing them?

“You” often stands in for the “I,” but sometimes, “you” masks the “I.” I like to think of this particular usage of the second person as one in which the narrator is writing to a self who no longer exists, which is the case with all three of the examples you mention: Natashia Déon’s here-and-now narrator is addressing her adolescent self at moments of great reckoning; Susan Grier’s narrator is standing on a threshold of understanding her role as the mother of a child who will become transgendered; and Brenda Miller’s speaker is in the midst of undertaking a transformation. So in some ways, it’s as if these particular narrators are recording messages to be placed in a time capsule: “See who I was,” the you says in these instances, of a specific instance or time. Perhaps that’s why we might call this usage “diaristic”: just think of those moments when you examine a diary in which what you wrote was written by another iteration of yourself: it is a kind of first person removed. As Joan Connor puts it, “The I creates a you; the you creates an I, in a Mobius strip of recursive identity.”

There are, of course, a number of pieces here that play with the question of who exactly “you” is. For example, Michelle Auerbach wonderfully satirizes how-to books and advice columns in “How to Screw Up a First Date.” Becca Lee Jensen Ogden’s “Nothing Good Happens after Forty-One Weeks” plays with the form of online pregnancy journals digests (It starts: “Hello Becca! You are now thirty-eight weeks! Your baby is now considered full-term”). I found Ogden’s piece particularly moving. It’s a very effective use of the second person in part because the target or referent of the “you” shifts subtly partway through the piece. Her “you” is both a voice addressing the narrator from outside as well as from inside. Among other things, it’s a wonderful metaphor for the experience of pregnancy. Do you see the “you” working in other ways that I’ve perhaps overlooked?

In the introduction to the anthology, I mention specific uses of the second person: first, the you as I (i.e., the “diaristic”); second, the epistolary, in which the writer creates a rhetorical apostrophe, or an address to someone who is absent (or who cannot—yet, and for whatever reasons—read what is being written, as in Brian Hoover’s “A Rock Snob to His Infant Daughter”); and third, the note-to-self or how-to manual. We’ve included essays in this collection that feature the more traditional use of the second person, a direct aside, or invitation, to the reader, though the essays are unconventional in their approaches (for example, Amy Leach’s “You Be the Moon” and Sarah Stromeyer’s “Merce on the Page”).

As I mentioned above, some of my students have commented on the distancing effect of “you” – especially when the “you” stands in for “I.” For me, intimacy returns (? I’m not sure this is the right word…) when the “you” addresses someone as one might do in a letter. This is how I’ve used the second person, and it’s how a small number of your contributors have used it. For example, Elizabeth Stone addresses her late father in “Thirteen Ways of Looking at a Blackguard” (another piece I found to be very strong). I wonder if you have any thoughts on narrative distance and intimacy and the use of the second person. Do you see it as potentially (if perhaps productively) distancing? Do you see ways of creating intimacy using this pronoun, as I do?

The second-person point of view has the ability to distance and create intimacy at the same time. Intimacy, as you so accurately point out, is created especially in the epistolary usage, in which a reader may feel addressed directly by the narrator, even though the narrator is writing to a specific person (e.g., Kim Adrian, Marsha McGregor, Elizabeth Stone); distance is achieved when the you stands in for I; or, perhaps, a certain remoteness is created, which takes the I out of the equation and allows the writer to scrutinize, perhaps more closely, the subject at hand.

Next: a question on form. I was very interested and intrigued by the brevity of some of most of these pieces. Amongst my favorites is Eduardo Galeano’s “Dreams.” It’s a tiny jewel of a text, only two paragraphs long, with a “you” that refers not to the narrator himself but out to an unnamed interlocutor. The text itself is dreamlike and imagistic. Another text that struck me was one you’ve mentioned, Sarah Stromeyer’s “Merce on the Page.” It is a tiny text about text: about the effects of layout and font choices and the physicality of letters on a reader. (The “you” here seems to address me, the reader, in perhaps the most direct sense of all the pieces.) What do you think is it about the use of the second person that cultivates brevity?

This is a terrific question. Perhaps part of the answer has to do with the seemingly experimental nature of the second person—readers will tolerate the schism between distance and intimacy only to a degree (although Stewart O’Nan manages to sustain the second person for the duration of an entire novel). Think about reading Gertrude Stein, and the kind of suspension—not only of disbelief, but of narrative expectation—required to enter into some of her texts; the effort is well worth it, but it requires a certain readerly stamina.

What is the greatest hazard of using the second person?

When you use it to be clever. Cleverness is not a hallmark of the second-person point of view. Or, at least, it shouldn’t be.

And conversely, what can it achieve that a simple first-person (or third-person) point of view can’t?

As we’ve noted, the second-person point of view distances the writer from what might be painful to write. In a way, the you becomes the ultimate persona—or, if it doesn’t, it serves as a process that might help developing writers better understand persona. This speaks to, perhaps, what you have called the “second-person voice”: voice is an element that is part of persona, the disguise adopted by a narrator to tell a story. And by using the second-person point of view, the narrator assumes a mask—distance, in this case—that infuses how s/he sounds with a kind of remote quality that cannot be achieved with first person (but certainly can be realized, without the dual edge of intimacy offered by second person, using third-person omniscient).

Which texts in this collection surprised you most in terms of what they were able to achieve through the use of the second person?

That’s a tough question… I think I was more surprised, in the acquisition process, by writers and editors we encountered who felt that the second-person point of view was too trendy, misused, or, simply, not their cup of tea. Certainly, there are instances of misuse with every experimental form. Some of the work in this anthology may have been better rendered in first person. But the writer stuck to the second-person point of view and had reasons to stick to it. In some ways, that stubbornness surprised me. In other ways, I find it charming.

Kim Dana Kupperman, thanks so much for doing this and for putting together the anthology. I know this conversation will find a place in future seminar rooms and in readers’ hands.